I’m a late comer to the Broadchurch party. Putting aside the debate we have with our lawyer colleagues about the feasibility of what is said and done around the court case, season 2’s scenery is stunning, sparkling in strong summer sunshine. So, having seen that David Tennant’s “home” was up for sale in a place called West Bay in Dorset, I googled where it was and was struck by the aerial beauty of the creek, harbour and beach.

So, on a bright, cold winters day we went to have a look.  It is beautiful. 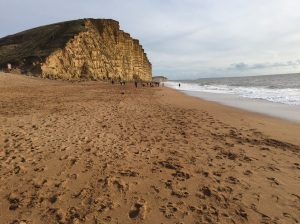 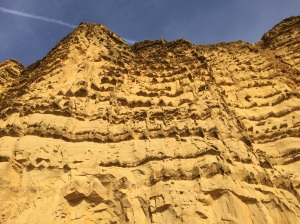 We we walked up the beach and back along the South West Coast path, golfers on the Bridport and West Dorset Golf course advised, as I expect they have done to so many in the last year or so, “Broadchurch  on your right”.  On top of a cliff was a spectacular hole. Tee off and drop roughly 200ft or so onto the green.  Gobsmacked at the complexity of such a hole on a windy coastal course, we watched a number of golfers tee off into the wind, calculating its strength and direction so that the halal missed the hazards lying in wait for it.

Tee off top right, down onto the green in the middle of the picture.

I commented that it would be nice to be out getting some exercise on such a bright day ( I was out of breath climbing the last cliff, so I was out in this winters sunshine). And so implanted the seed for another Microadventure.

I researched a number of golf clubs close to home and work.  Exminster Golf Centre seemed to foot the bill, so I made an appointment to have a look.  I signed up for 6 weeks of golf lessons there and then!

So, on Monday night I’ll be trying to swing a club and thrash the hell out of a wee white ball! 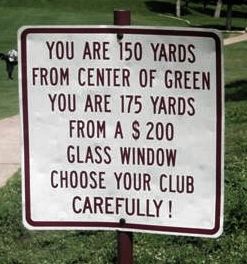