The early start was to see the boys off to the airport to play golf rather than anticipation of how slowly I would climb Donard.  But perhaps we could have left a bit earlier!

As we parked in the Slieve Donard car park, the weather lifted a bit. 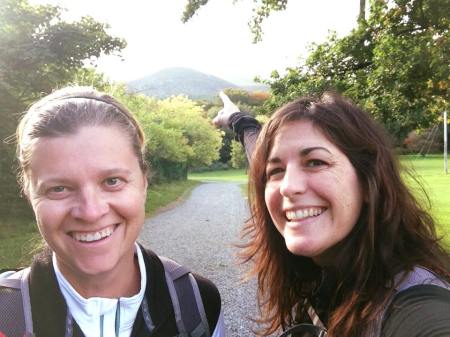 Two birds and a dog go up a hill…we’re for up there!

We walked up through the forest and I didn’t realise how much I was climbing.  The sun was out, the air still and I was hot in my new baselayer!  It was warm for October. 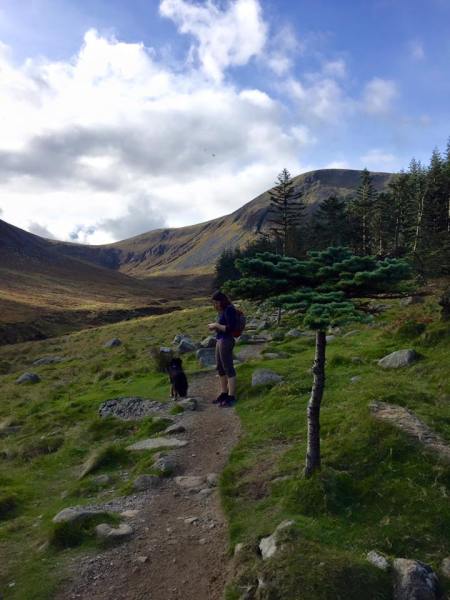 Molly kept it to herself that the steepest part was still to come as we had a snackette on the wall.  And by wall I mean the Mourne Wall.  The Mourne Wall was built in the early 20th century and passes over fifteen mountains, including Slieve Donard. The wall goes up the western slope to the stone tower and then down the southern slope. It took 18 years to build, from 1904 to 1922, with stonemasons working in the mountains from March to mid-October each year.

I did admire the view.  It really was amazing.  I couldn’t quite see Dublin on the horizon. 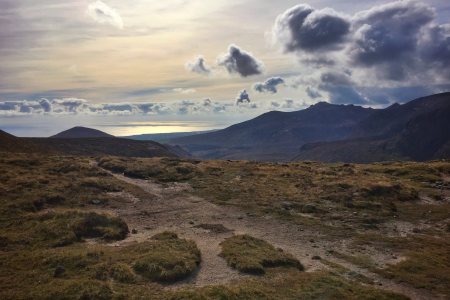 I wasn’t procrastinating…no, I really wasn’t.  I had to climb up the steep bit.  I could have sat there all day.  The sun was warm on our faces and we talked about the routes through the mountains and trail running. 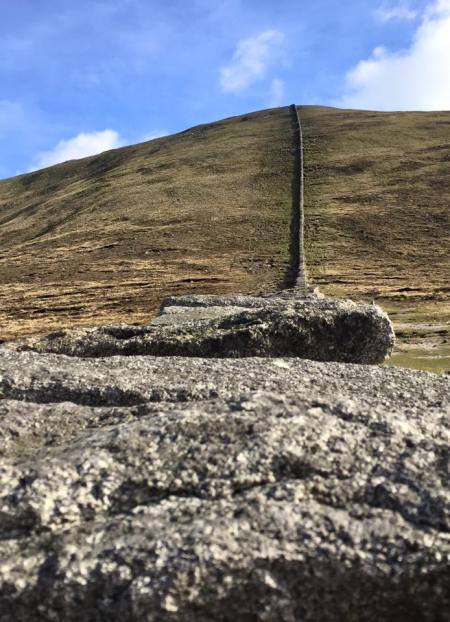 The Mourne Wall as it rises up to the summit

That bit was a lot tougher.  The world and its mother had zig-zagged up beside the wall and there were people zig-zagging down beside the wall; this meant that the ground was cut up and not easy to walk on so we walked a little more out in the open.  I stopped to look at the view…A LOT!! 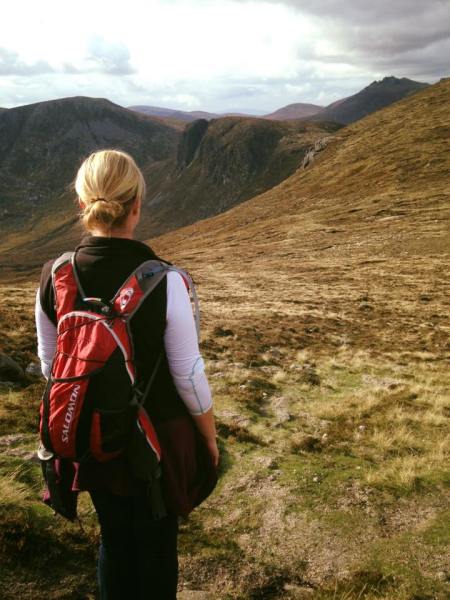 Oh look! A tuft of grass! And another one! 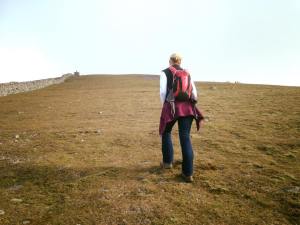 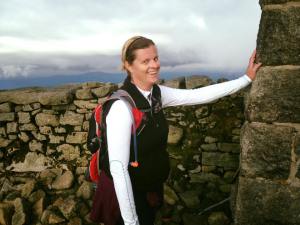 It was such a shame that the tower was full of trash.  I don’t just mean wrappers from energy-giving sports bars and tin foil from home-made egg sandwiches, eaten whilst seeking refuge from a storm; I mean bottles of cheap fizz and boxes of fireworks. It jarred with me.  I guess some people climb up here to get away from the rules, But my rule-abiding soul found it to be disrespectful.

And on reflection, I think we were a bit disrespectful to the chap sitting next to the cairn.  He was enjoying (or possibly not) a quiet moment or two watching showers come in from the east.  I was somewhat elated at reaching the top and we were taking selfies and photos to commemorate the trip and for the purposes of this blog.  We could have been quieter and let him feel the solitude for a bit longer… 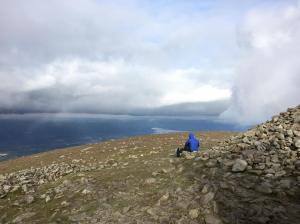 Indeed, when we got to the other side of the wall and to the cairn, I realised that there were a lot a memorials there.  They weren’t morbid; they were nice (if memorials could be described as “nice”) and I particularly took to the pair of walking boots, just sitting on the cairn. 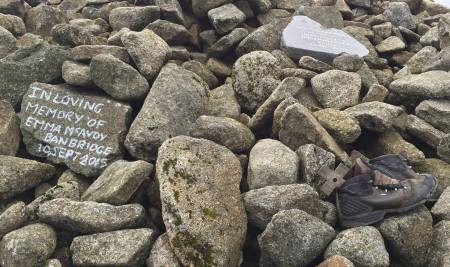 We didn’t loiter long.  The wind was up and it was cool on the sweat -dampened skin.  We were wild walking our way down to the Brandy Pad trail. 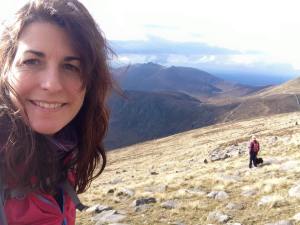 The Brandy Pad is a popular route through the Mourne Mountains and, as the name suggests, it was the route popular for smuggling in the eighteen hundreds.  The story was that it was used to smuggle items from the coast; coffee, tea, silk and ..brandy!  Then they would have used the Brandy Pad to cross the top of the two valleys until, upon reaching the Hare’s Gap, smaller groups would have dispersed in different directions to get out of the mountains and into the surrounding lands.

It took a while for us to spring-step our way from tussock to tussock to avoid springs and bog water!  Even Lola stopped to survey the scene! 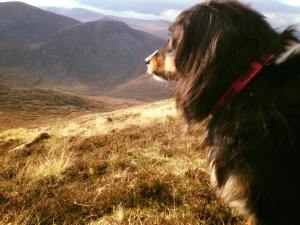 It seemed to take forever to get down.  The path seemed to go on and on.  We were meeting people just a short distance into the walk as the sun was slipping lower and lower in the sky.  The air was cooling and there was certainly the reminder that it was Autumn.  My fingers looked like sausages as they flapped around my knees.  As a direct result of our thoughts about the trash in the tower, we collected oddities along the trail on the way down.

I certainly was ready to sit down when we got to the car. Hours sitting at a desk makes my psoas muscles tight so my back always feels delicate.  I managed the climb/walk/decline without any twangs but the heated seats went on on the trip back to Belfast!

It was a lovely day out.  I set out to not disgrace myself.  Molly told me about the exploits of Stephen Nolan of BBC 5 live and Radio Ulster fame as we climbed.   He said he was hobbling with a pulled hamstring by the time he got back to his car 8 hours later – only to discover he had been locked in the car park!! I didn’t do that badly! 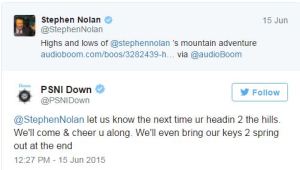