Having just read my blog about planning this March adventure, I lied.  I couldn’t walk.  I couldn’t walk for 3 days after Friday’s adventure!  Stairs weren’t great either!  But I guess that is what happens when you go from walking probably no more than 4-5 miles on occasions to walking freaking 14.68 miles in one day!

I woke with vigour (which is unusual for a “not a morning person”), grabbed my home-made cardboard pinhole camera and climbed up to the church behind the house.  I figured that it would give me a big sky to see the partial solar eclipse.  The cloud wasn’t really playing ball but it did allow for glimpses of the happenings through the thinner stuff.  The pinhole cardboard was a waste of time!

I played a little with the video capabilities of the iphone.  I’ve seen Alastair’s lovely videos of his microadventures and wanted to do something similar.  I posted about such on his FB page and he pointed me in the direction of iMovies.  So I set about getting some footage.

A few individuals and a police car watched from the car park and as the sky brightened, in the spirit of adventure, I walked over to discuss the morning’s viewing with a cyclist.  I don’t think he was a morning person either, as 10 seconds later I was on my way home to await the arrival of my walking companion, Nichola.

It was turning out to be a bright but cool spring morning and bravely we left the waterproofs behind.  Armed with phone, maps and backpacks full of snacks, we drove to Mincinglake Valley Park and were on the trail just before 11am.

Near the Rollestone estate we stopped for a snack of cake and chocolate, surprised that we had only been walking for just over 30 minutes!  I was ravenous already.  Perhaps a second breakfast before leaving would have been a good idea.  Looking for a nice perch overlooking the rolling Devon hills, Nichola kindly suggested that we wouldn’t want to sit on the spreadings from the stables!

We trotted on to Pennsylvania Road and while gabbing, missed the turn off for the Hoopern Valley Walk. Realising our error a fair way down the hill towards the city, we turned near an appropriate workmans’ van!

Climbing back up to find the trail again, we were distracted again by a misdirection to a seat overlooking a nature reserve and the landscaped gardens and feats of engineering that are the properties on Argyll Road.  We didn’t know we were on the wrong trail until we emerged into the thick of the Duryard Halls of Residence for the Uni! The mapping service on the iphone was useful to get us towards a point on the Taddiforde Brook where we would pick up the trail again.

Both of us are interested in architecture, so as we guided ourselves through the university campus, we enjoyed the finer points of the accommodation blocks and the squares surrounding them.  A pleasant chap saw that we headed up a blind alley and apologetically pointed us up and over the University hill towards the point that we were looking for.  The heat of the spring day was gathering and looking up that flight of steps, I suddenly understood that it was not just the spirit of youth that kept these Uni chaps and chapesses in fine fettle but unending hills within the campus!

Pretending to read the campus map at the top, we shed a few layers and caught our middle-aged breath. Forging our own path through the Uni brought us to The Forum, what looks to be an awesome public square at the heart of the campus.  Town planners might learn a thing or two from how to set out public space that its functional, invites you to have a seat and caters for such an activity both day and night.  As we descended towards picking up the Green Circle route again we could see stall after stall of food vendors.  By now my iced lemon cake had been well burned off and the look, smell and general hubbub of the plaza attracted our attention.  We understood that getting a little lost meant that we would never have come across this space and the activity within it, so we took full advantage (well I did!).  After all, that is the spirit of microadventuring, is it?

Nichola was well prepared with a rather healthy packed lunch.  I, on the other hand, was winging it a little.  The guy with no queue won my custom and £5 and a huge Lamb Kofta later…..

How pleased do I look with my hunter-gatherer skills?

Looking like weary hikers around the cool dudes was just not cool. We ate up and moved on, invigorated by the energy and vibrancy of the plaza and younger people (or was it the food and water?).

Slightly high on the joys of the Uni environment and a great lunch, we dropped down to St David’s churchyard. Quite different to the church where I started the day, this urban church seemed to provide sanctuary for a harder, urban human. Disturbing two rather nervous loiterers in a doorway, I realised the tube of tin foil in another porch was not Mary Berry’s.  We added an inch to our stride.

For every yin there is a yang and Nichola’s knowledge of Little Silver was just the antidote. This little hidden square is gorgeous – bright and cheery, everything St David’s wasn’t.

By the time we hit the Exe, it was becoming clear that we weren’t making a great dent into the distance we had to travel yet.  Nichola’s time pressures thankfully disappeared as we walked across the Exe river to the side of the city that I don’t know so well. Now we were needing a coffee and promised ourselves a sit down at the next cafe we saw.

We never got it!  One thing the City Council’s way-marking maps don’t show you are where you might get refreshments.  There are surprisingly few options alongside the trail.  My mind’s eye thought that we might be taking a breather in cute cafes that we had never been in before.  Instead, I blagged a re-fill of my water bottle from a gardener.  I don’t think he was going to stretch to a flat white with 2 sugars and a slice of carrot cake!  But I didn’t ask, so I’ll never know!

Unfortunately a work phone call distracted Nichola from a lovely view from Redhills back towards the city. Finally, our Uni landmarks were receding into the distance.  We felt like we were making progress.  I laughed and snapped as Nichola tried to keep her brand new walking boots clean.

I guess it doesn’t matter if you rip your jacket, as long as the new boots stay clean!

The Co-op on Dunsford Hill doesn’t sell coffee to go…..but we topped up on liquid refreshment and promised to stop at the next viewing seat for an afternoon snack.  The A30 is rather intrusive on this side of the city, so our stop overlooking fruit polytunnels wasn’t particularly leisurely.  Some stretching and the application of a little Glide assisted with the rest of the walk.

If the A30 reinforced the urbanness of this part of the walk, so did the artwork on the underpass.  Now, some might call it graffiti but this was art in our minds.  Yes, there were “tags” along the concrete wall, which I agree are nothing other than graffiti but these murals just popped! What do you think? 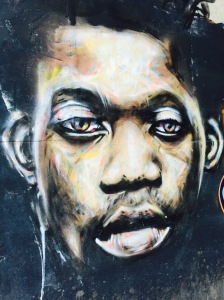 Our next pit stop was in Alphington village square.  I think we pinched a regular’s spot on the bench….  We had a serious chat about what distance we had left.  I had been running a GPS app all day and according to that we had about 3 miles left to do of the 12 mile walk.  We had no idea how much more we had walked retracing steps and getting lost!  We considered ringing for a bail out lift, just in case legs and hips got stiffer.

Rooting around in my bag for a drink, I discovered the book I had been carrying around all day!  I had shared a FB post from a running acquaintance in Mexico with a friend in Ireland.  March 21st was “Plant a Book Day” and since I was going to be out and about on the day before, I wrote a message on the cover of the book I had just finished, wrapped it in a sandwich bag and I decided to leave it on the bench in the square.  Not sure if the regular retook his spot on the bench when we left and whether he is a fan of crime fiction…. 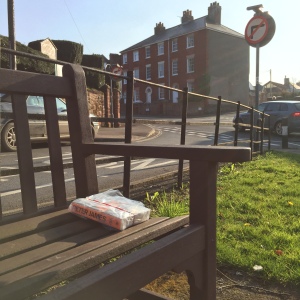 Leave a book on any public space with a note: “This book belongs to the public. After reading it, please leave it on a public space, so more people can benefit from it”.
This book planting takes place each 3 months: (March 21st, June 21st, Sept 21st and Dec 21st).

It is roughly at this point that we started to head northwards, back towards the car.  There was a real swing in spirits over the next few miles.  I had been feeling fine at Alphington but by the time we got into Ludwell Valley Park my hips were stiff and my legs and feet were fatigued.  I was starting to know the landscape we were in and there was little in it that was catching my attention and diverting my thoughts from my discomfort.

My thoughts on that section of the walk are few – the energy from waste building is prominent on the city skyline for miles around yet doesn’t feel huge when you walk by it.  I had a little altercation with a cyclist on the bridge over the canal that ruined my light spirit for a few moments and I never knew of the ruined papermills near the crematorium.

Eventually, as the sun set, we started to cut corners and I didn’t take one photograph between Alphington and the car.  Nichola got brighter as I got duller!  We reflected, as we walked, on the day we had had.

It was hard to think that the day had started so spectacularly with a partial eclipse.  The sun, in all its glory had stayed with us all day. It was warm in the middle of the day, but the coolness of the morning and late afternoon reminded us that it was only spring.  We are both busy ladies and we discovered that we are normally a little dull-minded when it comes to a Friday, yet today, our bodies were tired but our minds were bright and alive.  We realised that the Exeter Green Circle should also be renamed the “Allotment walk of Exeter”.  We passed so many!  And once again we lamented the lack of little eateries along the trail. Only we would want to walk 14.68 miles and not be in calorie deficit!

So our 12 mile dander turned into 14.68 (I’m precious about that double figure after the point!).  I had started the day thinking that I might walk a little extra to get to a half marathon distance, but that wasn’t necessary!  We were so pleased to see the car and our parting selfie relays some of the emotion! 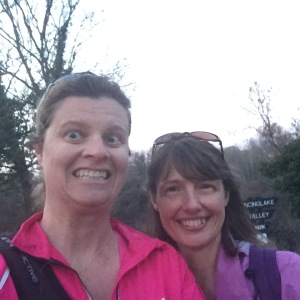 It is with the joy at learning another little skill (as much as you can with an iMovie template) that I share with you just a trailer of what will be an awesome video (that is art in progress) and will be subject of another post when it is available.

Nichola is mad enough to want to do something together in April and I wish her happy steps as she embarks on bite-sized chunks of walking the whole of the SW Coast path in her new, immaculately clean boots!